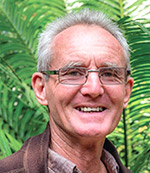 Originally hailing from Tasmania in Australia, Joss is the founder steward of the Pitchandikulam Forest in Auroville and a long standing Aurovillian. Joss has promoted and dedicated his life for the regeneration of the indigenous plants and their revival in the bio-region around Auroville as well as other parts of the state and country. With 4 decades of experience in foresting and planting he is considered a leading practitioner of this sector. The Pitchandikulam forest is a living proof of his dedicated and careful stewarding. His other accomplishments include establishing Adayar Poonga, a large re-forestation park in Chennai city and in creating several bio-diversity interpretation centres in many parts of